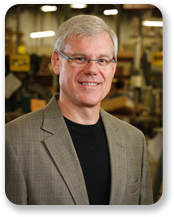 Mark started his career with Felton 25 years ago and has brought his strong sense of core values to the company culture ever since. After serving many roles in operational- and executive management, including that of President, Mark now serves as Chairman.

In a significant milestone for the company, Mark was instrumental in establishing the Employee Stock Ownership Plan (ESOP) in 2004, helping to strengthen an employee-engaged, solutions-based organization at Felton.

Mark received his B.S. degree from the United States Air Force Academy, going on to become a pilot and instructor on the USAF’s C-130. Upon leaving the service, he joined Felton Brush in 1985. Mark also remains very active in local and statewide manufacturing forums and currently serves as the President of the American Brush Manufacturers Association.

In addition, Mark is actively involved with the Missionary Air Group (www.missionaryairgroup.org), which is a non-profit Christian medical relief organization providing air transportation in Central America for sick or injured patients in remote villages. MAG also forms a logistics “bridge” for doctors, medical teams, ministry organizations, and relief agencies to get critical personnel and supplies to places needing help with emergency, preventative, and specialty care—places that are inaccessible except by air—particularly in times of natural disaster.

Not only is Mark helping to manage the organization and capital fundraising of MAG, but he is also fulfilling a lifelong dream of being a missionary bush pilot.